skip to main | skip to sidebar

It's not often that I get around to frying chicken... or really frying much of anything for that matter.  I thought about it and I can't come up with a particularly good reason why it's a rarity.  Perhaps it's, because the process is something of a mess... or perhaps it's, because I don't always have enough oil laying around.

Whatever the reason is, said reason did not hinder me from setting out to fry up some chicken legs a couple days ago.

I'm a big advocate of dark meat.  Not only does it have more natural flavor, it's a lot easier to cook, because you don't need to worry as much about it drying out.  You can cook the heck out of a chicken leg (or thigh) and it's still going to be juicy, where as, with a breast, you have a window of approximately 45 seconds between underdone and sawdust.  There's also the advantage of cost.  Since Americans demographically are not as fond of dark meat as they are of white meat, you can get a huge sack of chicken legs for half the price you would pay for a handful of breasts.

Your standard fried chicken recipe involves you dredging the chicken in some sort of flour and spice mixture (or shaking it up in a paper bag).  My wife however has recently learned that she is gluten sensitive so for her sake I decided to try a non-flour approach.  Another change I made from my standard frying technique is using shortening instead of peanut oil.  I've never done this before but a lot of websites claimed that it added a punch of flavor ... and I had shortening sitting around from when I made cookies or something a while back so I figured, what the heck.

I did shake up the chicken legs with some salt, pepper, thyme, and rosemary to give it a little punch of flavor.  May have used a little too much salt, but the wife enjoys her sodium so it was fine by her.  After a good shake I heated my shortening to 325 degrees in preparation for frying.  I only used somewhere between 1/8 and 1/4 inch of shortening in my trusty cast-iron pan.  I've seen some recipes calling for legitimate deep frying, actually dunking the whole think in a vat of peanut oil.  Where's the love?  If the literature is to be believed, proper fried chicken is done in shallow oil by turning the chicken every few minutes.

Timing for me worked out to about 20 minutes total.  I would turn in 5 minute increments, treating the chicken as though it had 4 sides, and then doing a quick minute or so on each side at the end just to give it a final crisp.  Unfortunately I ended up sitting by the pan the whole time carefully monitoring the temperature.  It fluctuated a lot as I turned the chicken and such and I had to keep finking with it to keep it right around 325.

Surprisingly (to me at least) it turned out great.  You'll find a picture of the finished product below (served with some wild rice) but that doesn't do it justice.  The dark meat allowed  for some pretty heavy cooking without drying out at all, and a little squeeze of lemon over the top at the end added some nice flavor.  I definitely noticed the absence of flour in the crust but it didn't really take anything away from the dish.  The skin provided enough flavor and texture to stand on it's own. 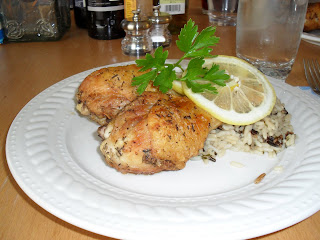 Posted by Unknown at 5:45 PM No comments:

Summer Stew with a Kick

On a hot 90 day, there's nothing better than a bowl of piping hot beef stew. Wait, what?!

I surprised even myself when those words came out of my mouth on a hot June day. Others might turn around a 2lb beef round roast into something that meets the typical summer fare; but for those of us that can't get enough crock pot action in the summer, this is the perfect recipe to sit and sweat like a dirty migrant farmer . With margarita in hand, I browned the entire hunk of beef in my classically seasoned cast iron pan (by classic, I mean my girlfriend won't eat anything that's been cooked in it). It was a good idea at the time; if anything, to seal in the seasoning (sea salt and cracked pepper). After a quick sear on all sides, I cut it down to stew-sized pieces and threw it in the CP with a package of beef stock and assorted vegetables. I went with some carrots, onions, celery, mushrooms, lima beans and of course, potatoes. Next time I'd like to switch out the celery with some mild peppers. Tomato wouldn't be bad; even a tomatillo, if I kept with the theme. Don't add more water -- the vegetables are going to sweat worse than you in about 8 hours. If you need liquid, add tequila, it tastes much better.

Next up, a little spice. 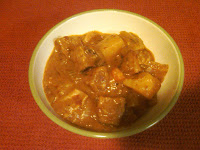 I added some finely chopped jalapenos in a pan with some hot olive oil to open up that pep. After a minute, I dumped a can of chipotle peppers in adobo sauce into the pan for some quick heat (less than 15 seconds). After throwing that mixture into the CP, I simmered on low for about 7 hours, stirring occasionally -- shots of tequila more frequent. Right before turning it off, I whisked up a quick roux (half cup fat of choice, half cup flour, and a dash of paprika) and stirred it into the stew. I blended up another margarita, cranked up the AC, and sat down to a killer meal.
Posted by Stefan at 5:41 PM No comments:

I'm going to wade into this endeavour with a dish that I'm fairly comfortable with, which should allow me to focus on giving the reader the flavor (heh, flavor, food page... we're off to a good start here) of the site content. 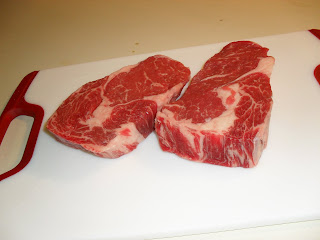 This is a dish which I believe I saw on Food Network at some point ... let me see if I can find it ... no, can't find it.  Anyway, the idea here is that you're pan frying this steak over very-high heat very quickly.  There's a couple things going on here.  First you're getting a real nice seer on the outside, and while the myth that this seals in the juices has been widely debunked at this juncture, it still adds a flavor that no amount of salt can replicate.  Second the meat just doesn't have time to dry out.

Boneless ribeye is the cut that I'm working with here.  I go about an inch and a half thick on it which typically works out well.  Thinner and you run the risk of just burning the whole thing to a crisp which isn't even particularly good as dog food. 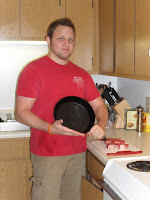 My pan of choice is cast iron and this pan I've been using for a good 6 years now.  It was handed down to me by my Mom and I have no idea how long she used it.  Needless to say it's well seasoned.  It's definitely seen its fare share of bacon during it's tenure with me so the whole thing is pretty well imbued with fatty (note, with an f, not a ph) flavor.

Interestingly I can't cook this meal without setting off the smoke detector.  I suspect the reason for this is the proximity of the smoke detector to the kitchen, and the fact that I fill the apartment with smoke...  So, that stands as a warning I suppose.  Open a window.  The smoke comes from the fact that you cook this in a 500 degree oven.  The pan should be in the oven when you pre-heat.  I'm not sure if this does anything other than save time, but it was in the recipe when I read it and I always do it.  Once the oven's heated the pan goes on the burner at high heat.  This is when the meat gets added.

Seasoning for the meat is simply.  A little oil (I like EVOO, the recipe suggested Canola, use whatever you want), LOTS of salt, and LOTS of pepper.  That's it.  There's an odd habit among people who are just starting to cook steaks, myself included in my youth, to load the steak with a ton of seasoning beforehand.  McCormick makes a fortune off this inclination but it's totally unnecessary.  Especially if you're working with a good cut like a ribeye, anything beyond salt and pepper just takes away from the meat.

Throw the meat on the pan for 30 seconds a side.  Once the second side finishes the pan goes in the oven (still 500 degrees).  Now, if something is going to go wrong with this recipe here's where it's going to happen. I do two minutes a side in my oven, but that's my oven and the doneness to which I enjoy my meat.  The first time you try to make this you're probably going to end up with overdone or underdone steak.  To get it right I had to make it about 3 times in my current oven, taking notes on thickness, time, and doneness each round.  When I move I'll probably need to do that again. 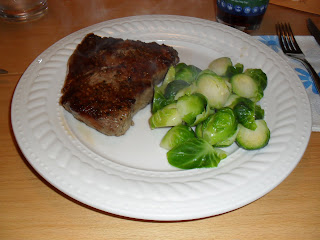